The idea of being human has a myriad of components many would look into from a biological and philosophical sense. Some of the most commonly discussed components used as the defining factor for what makes someone “truly human” include: a sense of individuality and identity, the ability to communicate with people in a natural way, tact in regards to the dead, and the idea of dealing with trauma. The second season of Gundam Thunderbolt, and by extension, this film compilation of said season’s episodes, tackles each and every one of these facets naturally, without actively trying to dwell on it as a main selling point. As such, this integral facet of Thunderbolt 2 has undeservedly been ignored or brushed off entirely.

Humanization is defined as giving more human elements to something, usually in fiction. When used in regards to characters, it is often used to mean the idea of showing characters off as more human than simply a character that is written as a role in the narrative. Seeing realistic banter what they do in their free time beyond what is directly tied to the concept or narrative of the product in question, showing background characters doing minor yet real things, etc. Modern anime are occasionally criticized with not having much of any of this shown off. Simply put, both Second Season and Bandit Flower have this in spades. In the events covering episode 5, we see two seemingly random soldiers exchange a quiet yet enthusiastic fist bump before flying into battle. In the events covering episode 6, we see Io and his new friend, Bianca, not only discuss Jazz, particularly in regards to famous Jazz artists and how the genre has evolved over time and what made it so special to begin with, but have a 96 second scene of them playing a favorite song of theirs. Said song brings back fun memories of the Thunderbolt Sector days back in the first season. 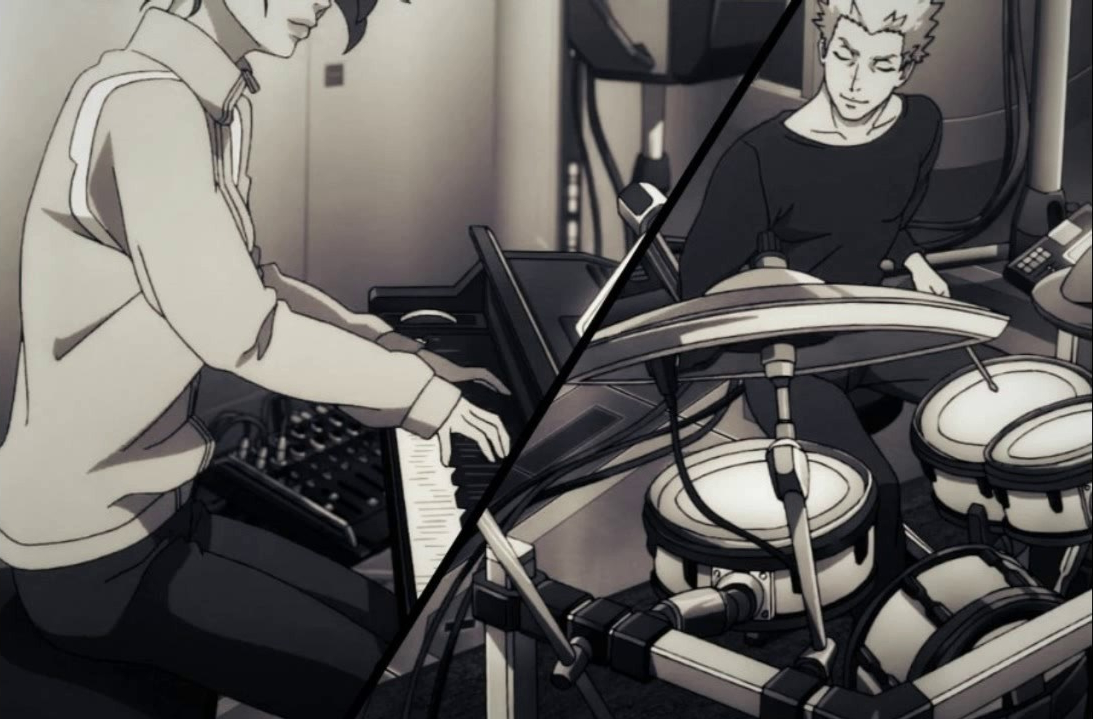 We then see a soldier drinking and crying over the death of his six-month old son whilst showing pictures of him to a comrade. He is one of the antagonists of this part of the story, as it is largely a battle between the Federation and members of a certain cult who salvages and reused uniforms and mecha of both sides of the One Year War of 0079. 10 minutes later, we see another enemy soldier move out, flicking a baseball player bobblehead he has stationed right beside him, only to later see an entire collection of them in his room at the end of the episode, or in this case, the events covering said episode.

Throughout the series, the banter between Io, Bianca, and Cornelius is shown to be charming and humorous. They act like real, sassy friends who have each other’s backs even with their misgivings with one-another, even discounting the fact that it is a given to survive in a situation such as war. The mildly agitated name-calling, the more friendly type of violence akin to lightly pounding bonking someone on the head with your fist or a plastic bottle or whatnot, and how open they are to each other about their hobbies and small requests. We did get to see the running gag of Io asking Cornelius for tissues back during Season 1 and December Sky, but the rest is completely new to this second season, particularly due to the inclusion of Bianca. It’s cute to see them warm up to each other so fast and get into long, passionate discussions about their favorite hobby in such a short amount of time, again, in the middle of what is effectively turning into a 3-way war.

Little touches like these add some minor depth to even the most insignificant of characters, making things feel more alive. They also freshen up the cast a bit more and make the time spent with them more fun as they know how to actually communicate like real people would rather than simply in a more constructed and narrative-continuing or character-justifying (the latter of which is never a good sign) type of way.

Referring back to the raw savagery that was the events of season 1, it was a standoff so devastating that major physical, mental, emotional, and even reputation-based consequences were inevitable to occur. When Karla had her mental breakdown towards the end of the time spent in the Thunderbolt Sector, it turns out that her mind regressed to that of a child as a result. Since Daryl’s mechanical hand resembles the mechanical hand of her father’s, he has to take care of her occasionally as a way of treating her mind so that it can become stable once again. During the Thunderbolt days, there was a mission where a bunch of teenage rookies were sent into battle to be mowed down viciously so that Io and others could break through into the Zeon ships. As a result, some of Io’s peers detest him. While he never has to confront them about it or even interact with them, it’s clearly something that will carry over to a possible third installment as they, over the course of the second installment, find themselves conflicted about him over time rather than simply resentful of him. Meanwhile, Daryl is considered a legend by some Zeon remnants for besting and capturing Io, including the Living Dead division. As a result, some members, specifically Billy Hackam, indirectly try to test him to see if he lives up to his reputation.

With everything having been said, it is only fitting that the main antagonist of this second installment is a cult wherein people sacrifice themselves for the same of a mission and one figurehead. This cult is known as the South Seas Alliance. Whereas episode 5 showed two kamikaze Zeon remnants cursing their superiors over the mission the more they thought of it, these cultists are more generally willing to sacrifice themselves. Clearly, some members were too scared to die, or at the very least, didn’t want to die until their contribution to the objective was fulfilled. However, there were plenty who actively suicide bombed themselves to distract the Federation or otherwise make way for their comrades. Not every member was entirely convinced however, like Claudia, who felt entirely conflicted when Io tried and failed to get her out. The leader of the cult is a newtype named Levan Fuu, who was revealed to be a patient in a newtype facility created by old lady who now runs the ship Io is working in. The awkward scene added in at the beginning was a younger Levan Fuu waking about the nature of sacrifice and humanity, whilst showing them with the necklaces we see in the show proper. This only makes him stronger of a character despite being such a non-presence until the very end as he is revealed. We already see what he has done, but to see that he developed this mentality due to his time in this facility helps make him more interesting, and made the idea of him becoming a real presence in a third installment all the more tantalizing. After all, he discovered what he believed people can do, and exploited that to turn his followers into mindless, self-sacrificing drones with no real interactions with each other whatsoever. How fitting that these nameless, hive-minded goons are mowed down by Io and Bianca, the diametric opposites of these people. How perfect that they were so easily scammed by one who claimed to be of their own. It’s almost the perfect punishment for those who have sacrificed some of the most basic human qualities.

Thanks to this and more, Gundam Thunderbolt’s second season and film become more than just sophomore installments short-circuiting in the shadow of their brutal predecessors. They take a life all on their own, with enough style to keep up along the way. Is this better than the first season? No. Regardless, this second installment became one of the most powerful displays of humanity all the while, with only the likes of Turn A Gundam to rival it. Given this, it’s fair to say it managed to soar high with its man-made wings as it jams out while waiting to pass the welding torch.

View all posts by codeblazefate